So some might have noticed I have been flaky about posting five times a week. Well I am here to tell you...it is only going to get worse.

Sorry guys, something has come up in my life that will be taking me away from the blog for the foreseeable future. Don't worry, it is a good thing and I hope to make an official announcement soon. Until then I will try my best to at least keep the Weekly Update and New Releases posts going and hopefully have one other post for you guys. 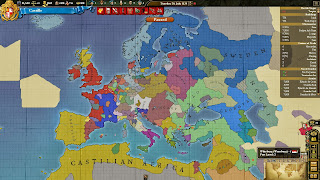 In order to allow players a more direct role in guiding the course of history, Paradox has begun the “Rewrite History Contest” for fans to create their own in-game events and share them with fellow players on the Paradox Interactive Forums. The top suggestions will be selected and officially added to Europa Universalis IV in a forthcoming game update. For full details on the contest, visit their forum.

Here is your chance to leave your mark on video game history.

10 Things You Didn't Know About Sherlock Holmes by Oliver Tearle at Huff Post.
14 little known facts about the writing of 1984 by Joel at Ink Tank.
Book Tour Planning 101 by Midge Raymond at Jane Friedman.
How Heroic Is Your Homework? On Research In Historical Fantasy by Snorri Kristjansson at Fantasy Book Critic.
How The Rules Of Screenwriting Can Improve Your Prose Fiction by Christopher Shultz at Lit Reactor.
INCEPTIO awarded the B.R.A.G. Medallion by Alison Morton.
Sale! Three new novels to Tor! by Mary Robinette Kowal.
These Steampunk detectives are going to darker places than ever before by Charlie Jane Anders at io9.
Time Travel and Gender by Cora Buhlert.

10 Alternative World War II Plans That Would Have Changed History by Marc V at Listverse.
29 Historically Impossible Details in Famous Movies at Cracked.
Designs for Great Architectural Landmarks that Were Never Built by Vincze Miklos at io9.
The End of an Era: Apollo 17 by Heather Domin at Unusual Historicals.
Half of UK would rather live under Roman rule than today's Government by Benjamin Russell at Express.
Nuclear bomb nearly exploded over NC in 1961 by Belinda Goldsmith at MSN.
The Union Jack on the Moon by Ron Miller at io9.
Why Greece Is Not Weimar by Roger Cohen at The Greek Crisis.

What is Steampunk? on Weekends with Warren Boland at 612 ABC Brisbane.

Alternate Histories of the World by Matthew Buchholz at I Smell Sheep.

Matt Mitrovich is the founder and editor of Alternate History Weekly Update and a blogger on Amazing Stories. His new short story "Road Trip" can be found in Forbidden Future: A Time Travel Anthology. When not writing he works as an attorney, enjoys life with his beautiful wife Alana and prepares for the inevitable zombie apocalypse. You can follow him on Facebook or Twitter.
Posted by Mitro at 11:35 AM